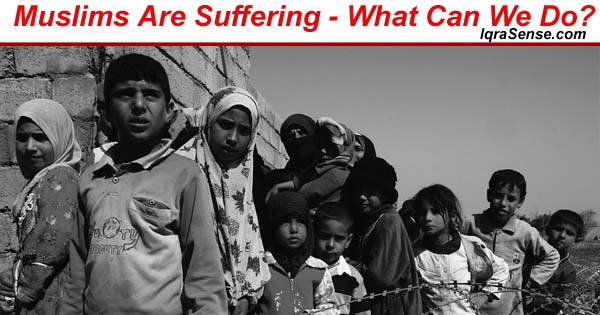 Not a day goes by when we don’t hear of innocent Muslim lives being lost to wars and other heart wrenching tragedies. This has been especially true for the past few years, when the world has witnessed innumerable Muslims die in wars and related calamities.

Children, mothers, and fathers experience unspeakable horrors of destruction and killing of their family members – sometimes many simultaneously – in front of their own eyes.

How can human beings witness such a large scale loss without showing more concern than what is apparent? Isn’t this silence making a mockery of the values of humanity that the decent human beings purport to uphold?

Such events now don’t even seem like news anymore. When once loss of a few lives was taken seriously, the never ending conflicts have desensitized us to the point that even many deaths in one day rarely gives us pause to think of the grim situation of those affected.

Hadith on praises and thanks to Allah – Sahih Bukhari

Can one really get desensitized to such tales of tragedies?

Some of us don’t want to hear such stories as they are too depressing and disturbing. But if we stopped listening, do we really think the problem will go away if we buried our heads in the sand? If we stopped paying attention, what else then would move our hearts to act to help such suffering souls? Would we want others to stop listening if we were instead hit with such calamities and tales of horror?

For those of you, who have followed this blog over the years know quite well that we don’t get into the political debates and discussions as there is no shortage of such forums both online and offline. But that doesn’t mean that we as Muslims can’t do anything else to help those who are going through such tests and trials of life.

As Muslims, we take our guidance from Quran and Hadith of the Prophet (s). In line with those teachings, below are some of what we can do to help our fellow Muslims.

Stay Patient in Times of Trials

First and foremost,  in times of trials and tragedies, we should stay patient. As Allay says in the Quran:

* Who, when afflicted with calamity, say: ‘Truly, to Allah we belong and truly, to Him we shall return.’ (Inna Lillaahi wa inna ilayhi raaji’oon)

* They are those on whom are the Salawaat (i.e. who are blessed and will be forgiven) from their Lord, and (they are those who) receive His Mercy, and it is they who are the guided ones.” Quran (Surah Al-Baqarah, 2:155-157) (See Surah Al-Baqarah English)

So, by keeping the suffering of those afflicted with such horrors alive in our hearts, we should repeatedly say “Inna Lillaahi wa inna ilayhi raaji’oon.” Recognize Your Responsibility Toward Fellow Muslims

Next, let’s recognize our responsibility toward our fellow Muslims, especially those who are suffering and are in need. Let us remind ourselves of the hadith of the prophet (s), where he said: “The similitude of believers in regard to mutual love, affection, fellow-feeling is that of one body; when any limb of it aches, the whole body aches, because of sleeplessness and fever.” [Sahih Muslim]. Let’s ensure that we don’t allow ourselves to get desensitized to the point of no return to caring and empathizing for such incidents.

Hadith on prayers between adhan and iqama

Educate Your Children on the Affairs of Muslims

To help children become good citizens and productive members of the society, one needs to start at an early age. As part of your instilling Islamic teachings in your children related to matters of worship and good manners, make them also realize their duty toward helping others including Muslims, regardless of how near or far they may be. Educate your children on the affairs of the Muslims and get them involved in various small and large projects aimed at helping others in need. This will imbue a sense of responsibility right from the start that will make them become useful members of the societies that they live in.

Be Proactive in Finding Organizations that Help

You don’t have to look far and beyond to help these Muslims. Most governments now have established official organizations that are delivering help to these people in need. Be proactive and you will be able to get your contributions delivered. Remember, where there is a will, there is a way.

Open Your Doors to Fellow Muslims

For those who have the means to go the extra mile, we can open our doors to those who are suffering. Remember, thousands of non-Muslim families across Europe and North America have opened their homes and hearts to help Muslims in need. We as Muslims have a greater responsibility not only because they are our fellow Muslim brethren but also because we as Muslims tout Islam to be a religion of charity and helping others in need. This is the time to put our beliefs into practice.

Pray to Allah for the Well Being of Muslims

Just like when we pray to Allah secretly for the solution of our personal issues and problems, we can start to include them in our prayers as well. Let’s pray with a sincere heart that Allah relieve children, parents, and other family members of their calamities and the pains of losing their loved ones. Let’s remind ourselves of the hadith of the prophet (s) when he said, “The supplication (dua) of a Muslim for his brother in his absence will certainly be answered. Every time he makes a supplication for good for his brother, the angel appointed for this particular task says: `Ameen! May it be for you, too’.” [Sahih Muslim]. If we would want others to pray for our well being if were to experience such tragedies, let’s start by doing it for others.

Hadith on not praying immediately after Fajar prayers Finally, let’s not forget that before you reach out to those in need, the needy dependents in your family have a greater right for help before others. The Prophet (peace & blessings of Allah be upon him) said,“The best charity is that which is practiced by a wealthy person. And start giving first to your dependents.” [Sahih Al-Bukhari] Volume 2, Book 24, Number 507.

Despite the darkness that doesn’t seem to be dissipating, we should never lose hope in the mercy of Allah. Let’s recall what He tells us in the Quran:

Also, as Shaykh al-Islam Ibn Taymiyah (may Allah have mercy on him) said: “A calamity that makes you turn to Allah is better for you than a blessing which makes you forget the remembrance of Allah.”

Let’s therefore use these times of distress to come closer to Allah and to ask for His forgiveness.

Feel free to contribute your thoughts and ideas in the comment box below. Also, share it with others.