29. Muhammad ( ) is the Messenger of Allah, and those who are with him are severe against disbelievers, and merciful among themselves. You see them bowing and falling down prostrate (in prayer), seeking Bounty from Allah and (His) Good Pleasure. The mark of them (i.e. of their Faith) is on their faces (foreheads) from the traces of (their) prostration (during prayers). This is their description in the Taurat (Torah). But their description in the Injeel (Gospel) is like a (sown) seed which sends forth its shoot, then makes it strong, it then becomes thick, and it stands straight on its stem, delighting the sowers that He may enrage the disbelievers with them. Allah has promised those among them who believe (i.e. all those who follow Islamic Monotheism, the religion of Prophet Muhammad till the Day of Resurrection) and do righteous good deeds, forgiveness and a mighty reward (i.e. Paradise). (Translation by Muhsin Khan / Hilali)

Muhammad is Allah’s Messenger, and those who are with him are firm with the unbelievers but compassionate with one another. You see them occupied in bowing and prostrating and in seeking Allah’s bounty and good pleasure. They are distinguished from others by the marks of prostration on their faces. Thus are they described in the Torah. And their parable in the Gospel is that of a tilth that puts forth its shoot, then strengthens it so that it becomes stout and stands firmly on its stem. This is a sight pleasing to the sowers and one by which the unbelievers will be enraged. As for those who believe and do righteous deeds, Allah has promised them forgiveness and a great reward. (Translation by Abu Al-Alaa Maududi)

Muhammad is the messenger of Allah; and those who are with him are strong against Unbelievers, (but) compassionate amongst each other. Thou wilt see them bow and prostrate themselves (in prayer), seeking Grace from Allah and (His) Good Pleasure. On their faces are their marks, (being) the traces of their prostration. This is their similitude in the Taurat; and their similitude in the Gospel is: like a seed which sends forth its blade, then makes it strong; it then becomes thick, and it stands on its own stem, (filling) the sowers with wonder and delight. As a result, it fills the Unbelievers with rage at them. Allah has promised those among them who believe and do righteous deeds forgiveness, and a great Reward. (Translation by Yusuf Ali) 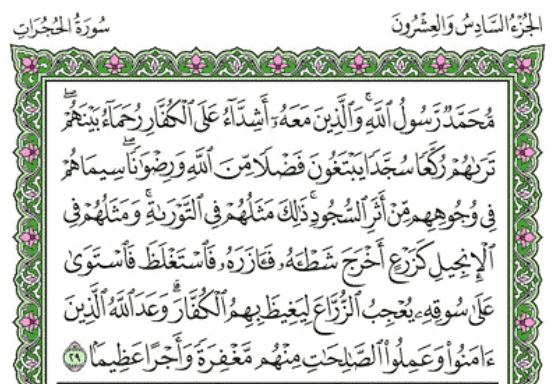