===> A bridge to safety unveiled for Hajj stoning ritual

(2009) Mecca, Saudi Arabia (CNN) — Chanting “Allahu Akbar” — God is Greater than any — more than 2 million pilgrims crossed new pedestrian bridges Saturday to perform one of the last rituals of the Hajj season.

Jamarat is a re-enactment of an event when Prophet Abraham stoned the devil and rejected his temptations, according to Muslim traditions.

The ritual stoning of three pillars, which occurs in the tent city of Mina — about two miles from Mecca, was the scene of stampedes and many deaths in the 1980s and 1990s as pilgrims passed a crowded bottleneck area leading to the small pillars on the ground.

But this year the Saudi government completed a new project that avoids past congestion at the site. The government has erected three massive pillars and completed a $1.2 billion, five-story bridge nearby where pilgrims can toss stones. Authorities and pilgrims say it’s a roomier atmosphere and more efficient way to accommodate the faithful.

“It is an immense responsibility that we had to deal with. About 3 million pilgrims move in a small geographic area at the same time wanting to do the same ritual. So we have been preparing for this for years now.”

Irtiza Hasan, a pilgrim from the United States, said all went well at the ceremony.

“The only incident I saw was that there were some handicapped women who were turned away in fears that they get hurt.” 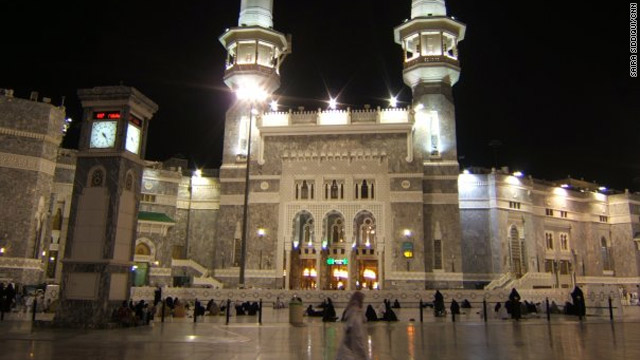 Interactive: Stages of the Hajj

But Mohammadi said, “There are 10 vans on the second floor especially designated to serve the elderly and handicapped. Each van can take up to 14 pilgrims.”

As a measure to alleviate harm, according to Muslim traditions, the elderly and the handicapped can appoint someone else to stone for them.

The five-story Jamarat bridge is air-conditioned at 19 degrees Centigrade, or 66 Fahrenheit, throughout the day and backed by water sprinklers that can reduce the temperature to about 29 degrees C, or 84 F. The bridge is designed to allow the addition of seven more levels to hold as many as 5 million pilgrims in the future if the need arises.

According to authorities, the bridge is 950 meters (1,039 yards) long and 80 meters (87 yards) wide. Each floor is 12 meters (13 yards) high with three tunnels and 12 entrances and 12 exits in six directions. It has a helicopter pad for emergencies.

According to Mohammadi, the project has 509 advanced closed-circuit television cameras monitoring pilgrims’ movements. Those cameras feed into the main operations room, which oversees the Jamarat Bridge and the surrounding areas — all screened by dozens of security officers on 72 monitors at the operation room.

The stoning ritual is done over at least two days, where pilgrims stone three pillars at Mina — believed to be where the Prophet Abraham stoned the devil when he tried to dissuade him from obeying God’s orders to slaughter his son. According to tradition, the event was a test from God, who gave Abraham a ram to slaughter instead.

The last ritual that marks the end of Hajj is when pilgrims go from Mina to Mecca to make a last visit to al-Masjid al-Haram, Islam’s holiest site, before going back home.

The ritual is called Tawaf al-Wada’a — or farewell circumambulation in the holy mosque. It’s where pilgrims go around the black cube seven times counter-clockwise asking that their Lord accept their pilgrimage and grant them another visit to the holy city.

Read about Rituals of Hajj

Learn about History of Hajj